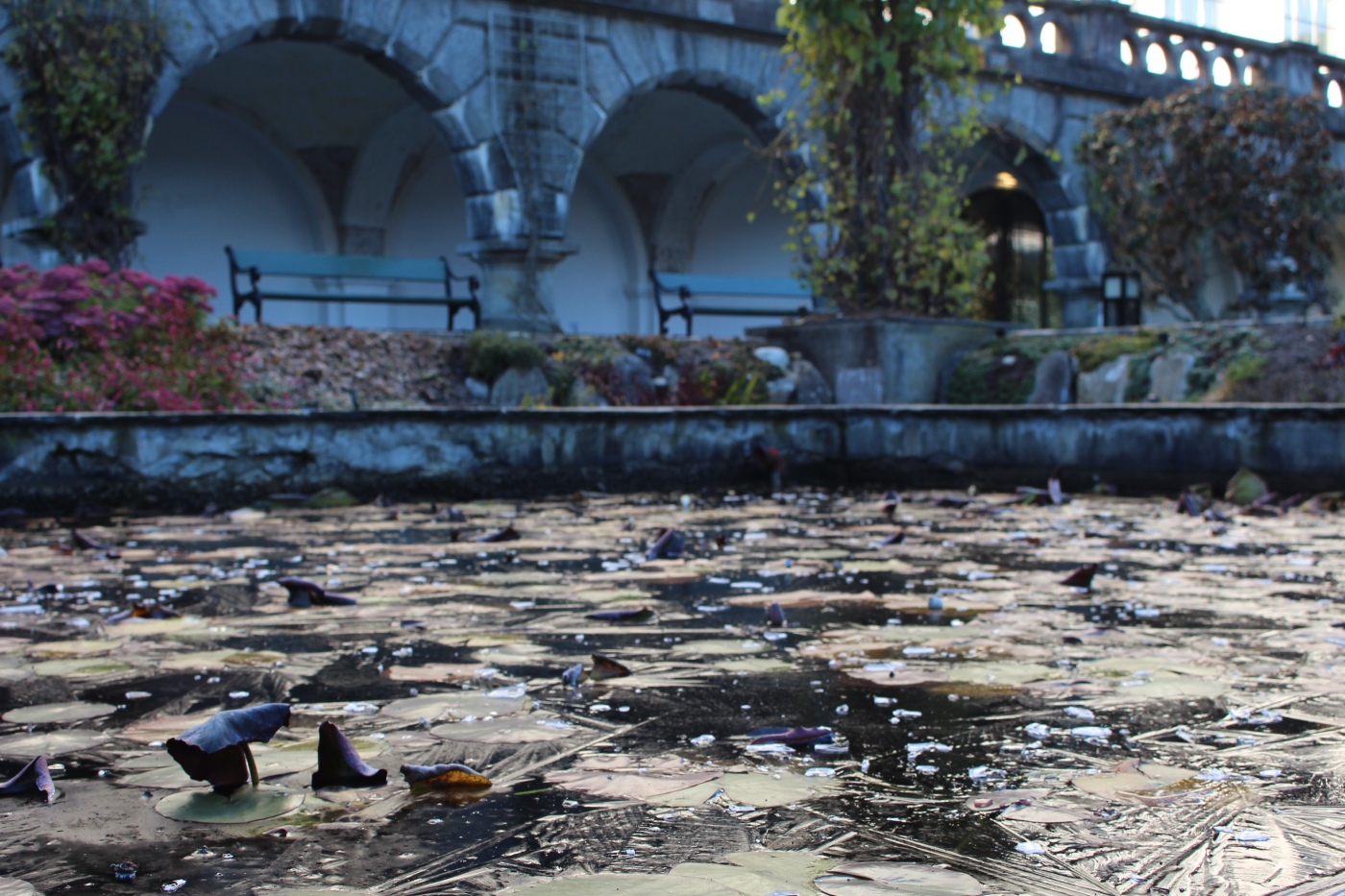 Brilliant both literally because the sun was shining – rather than its reputation as a wet/overcast climate – and also because it really is a wonderful place.

Being a Sunday we did miss out on a few places that we had hoped to visit. However, this forced us to look into places we wouldn’t have otherwise found…such as this frozen water pond in the gardens of the University and Natural History Museum.

We walked everywhere which let us explore the narrow cobbled streets that can only be accessed by foot.

As we traversed the city we circled the central lake called Lille Lungegardsvann. We saw white swans and other types of birds – a couple of types of gulls, that again seem huge compared to ours, as well as ducks, pigeons etc. The swans were the highlight. 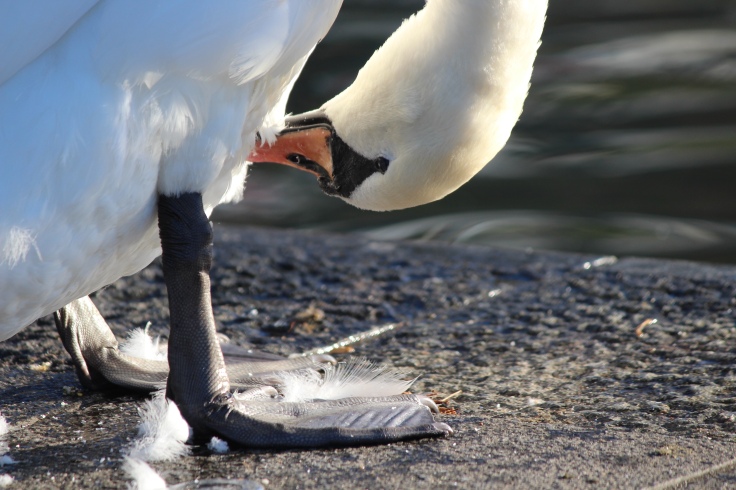 A cute little cafe called Godt Brodt which was our morning coffee stop came recommended as an organic bakery with traditional pastries and decent coffee. It definitely lived up to expectations.

After our pit stop we headed down to the area known as Bryggen. Bryggen was established around 1070, around the Viking era, and is now a World Heritage site. The current buildings date back to the Hanseatic (German Merchant) era. Bergen was the original capital of Norway and this area in particular was a trading centre with commercial warehouses, taverns and shops. You can read detail of the history at the Unesco website . A couple of the buildings are currently undergoing restoration. The outside is draped in a canvas that has the original building image printed on the outside so as to preserve the aesthetic of the landscape as best as possible. Through some windows we could see the restoration being made on top of the original foundations.

Walking through this area was quite amazing. The wooden buildings were close together. Even the street was ‘paved’ with wooden boards. There were hoist houses preserved which showed how goods would have been raised and lowered from the loft warehouse spaces. Today there are shops and galleries behind the heavy wooden doors that line the three levels of wooden corridors. 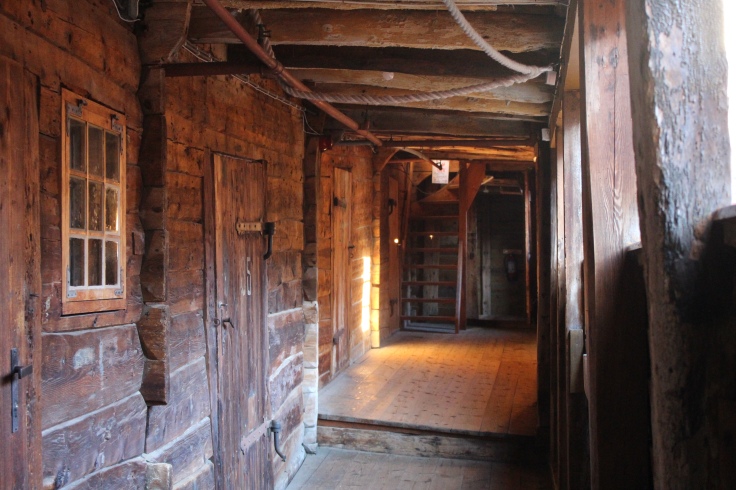 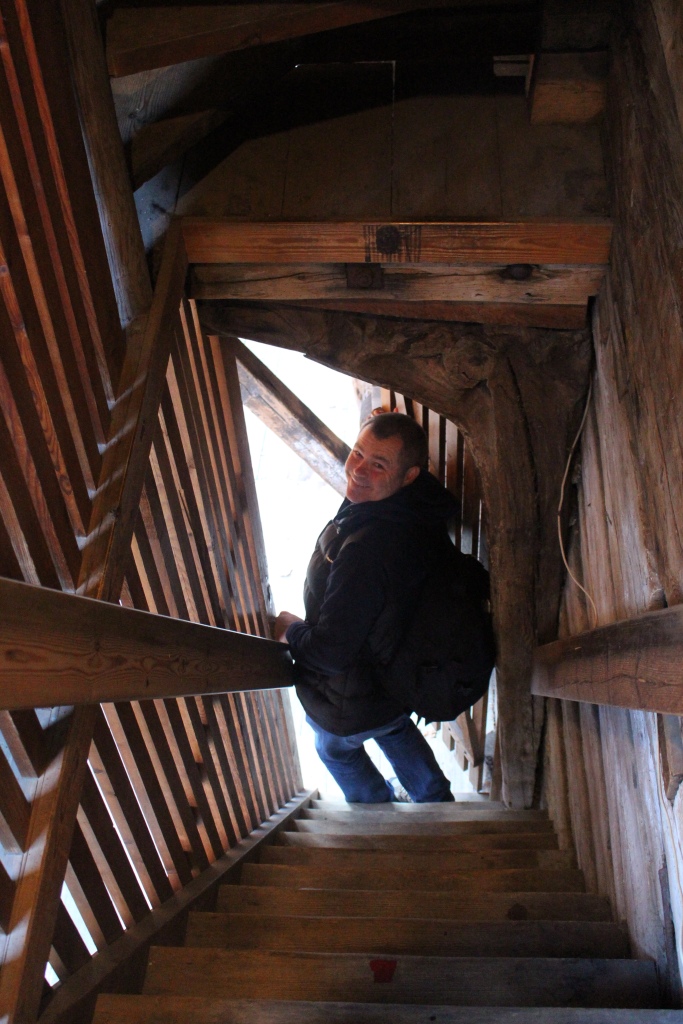 From here we headed around to where we hoped to visit a working Silver Smith centre. Unfortunately this was closed, but we did happen upon the Bergenhus Festningsmuseum. The Bergen Fortress Museum. This museum was really interesting and was established only in 1996. What struck us about this place first was the lady who greeted us as we came in. She loved her history and was proud to talk to us about what we would find here. The museum was on three levels. The top floor was about the fortress and its role through medieval history through to the late 19th century. There were models showing the way Bergen had changed and the different ways the rulers and feudal overlords used the fortress area throughout the centuries. They had some excellent examples of military dress throughout the centuries also on display.

The second level was dedicated to the period from 1940 – 1945. The German occupation and Nazi movement and Norwegian resistance. Bergen was a strong area of resistance to the Germans during WWII. The invasion of Norway was a very organised and planned movement. It’s possible that the saving of Norway in the long term was the attack on the German Ship the “Blucher” which had aboard 2000 German soldiers all destined to overcome and secure Oslo. The German army lost 1000 with the sinking of this ship from Oscarsborg Fortress in the Oslofjord near Drobak. Until that time, the Norwegians did not really understand the situation they were facing, and the locals rushed to their boats to save those in the water. Half of the soldiers were spared and free to continue on to Oslo where they took over and occupied the city. Invasion of all major city’s along the long Norwegian coast were simultaneous thus rendering Norway completely occupied. Norway then became a battleground between the Germans and the British army’s and sustained bombing and destruction. The political situation became very difficult as it did for many European countries at that time. The Mayor remained in office in compliance with Germany’s terms even though he was not in favour of the Nazi Party. He made this decision to prevent the elevation of someone who was truly sympathetic to the cause to holding the office and abusing the power to the detriment of Norway.

During this time the Royal family managed to escape and lived in exile in England and then Washington DC. Hitler tried three times to convince the King to ally himself and Norway with the Germans, however the King had retained a book of Norwegian Law which he carried in his breast pocket and which stated that Norway’s Monarch was selected by the people. He therefore answered Hitler each time that Norway was not his to give away, Norway belonged to its people.

The ground floor was dedicated to the more recent engagement of Norway’s armed forces. Mostly in peacekeeping duties and UN roles as do many modern nations today. Since WWII there was application to develop this museum. It wasn’t until the mid 1990’s that the Commander in Chief of the Fortress made the building available, and the Government then provided some funding that these exhibitions could be established. The museum is the only free museum we have come across, and not only that, on the ground floor there is a tea room where we were invited to help ourselves to tea, coffee and there was even a bowl of fruit! The lady there was so helpful and knowledgeable that this by far rated as one of the best cultural stops so far. As we sat eating the sandwiches we made at breakfast, enjoying a cup of green tea, another gentleman visiting the museum was reading from the tea room’s bookshelf and was also interested in having a short chat. This was such a friendly place – I would recommend it to any visitor to Bergen.

We left from here over to the Kode Museums. This is a series of 4 Art Museums back near the lake – Lille Lungegardsvann. The Kode 1 Museum was in a beautiful building know locally as ‘The Permanent’ and is the West Norway Museum of Decorative Arts. We had been told of an exhibition of silverware for which Norway is famous. The Silverware was beautiful to look at, but unlike our previous experience, it was very difficult to get any information. There was only minimal English explanation and the guide that identified everything with dates and artists was written only in Norwegian. The English lady at the information desk did say that they have advised the Administration that further translation is necessary, but as yet nothing has been done. We had paid $20 each to enter the museum and whilst it was a beautiful building with an interesting story, we really didn’t feel this was worthwhile. (The pass could be used in the other 3 Kode Museums again on Tuesday, however we would be gone and unable to get the full value. It was disappointing.)

We walked back to the Bergen Fortress which we thought was open until 5pm. We had a map for a self guided tour which we did, but unfortunately access to see inside the buildings closed at 3pm. Nevertheless, with the guide map and English information (courtesy of the helpful lady at the Berghaus Museum) we enjoyed the walk and environs of the Fortress Trail.

By this time it was after 5pm and the temperature had dropped noticeably. We headed back to the hotel before going out for dinner.

Dinner was a great Italian meal – Andrew ordered pasta with reindeer, yes he’s really taken to this particular Norwegian favourite – and I ordered a pizza. Both dishes were absolutely delicious and the two meals with a glass of wine each cost under $100 which by now we realise is a bargain! Can’t wait to get on the ship tomorrow where our meals are included.

In saying that we have been managing to keep our costs under control by having a good breakfast, included in our hotel stay, and making ourselves a sandwich from the great breads, cheeses, fish/meats, salad etc that is all on offer at breakfast time. We have then only paid for coffee or the odd pastry here and there…as you do!

We stopped off at the same bar as last night to try another type of beer before heading back to call it a day. We will have time to go to a couple more places in Bergen before we set sail tomorrow evening for the North.