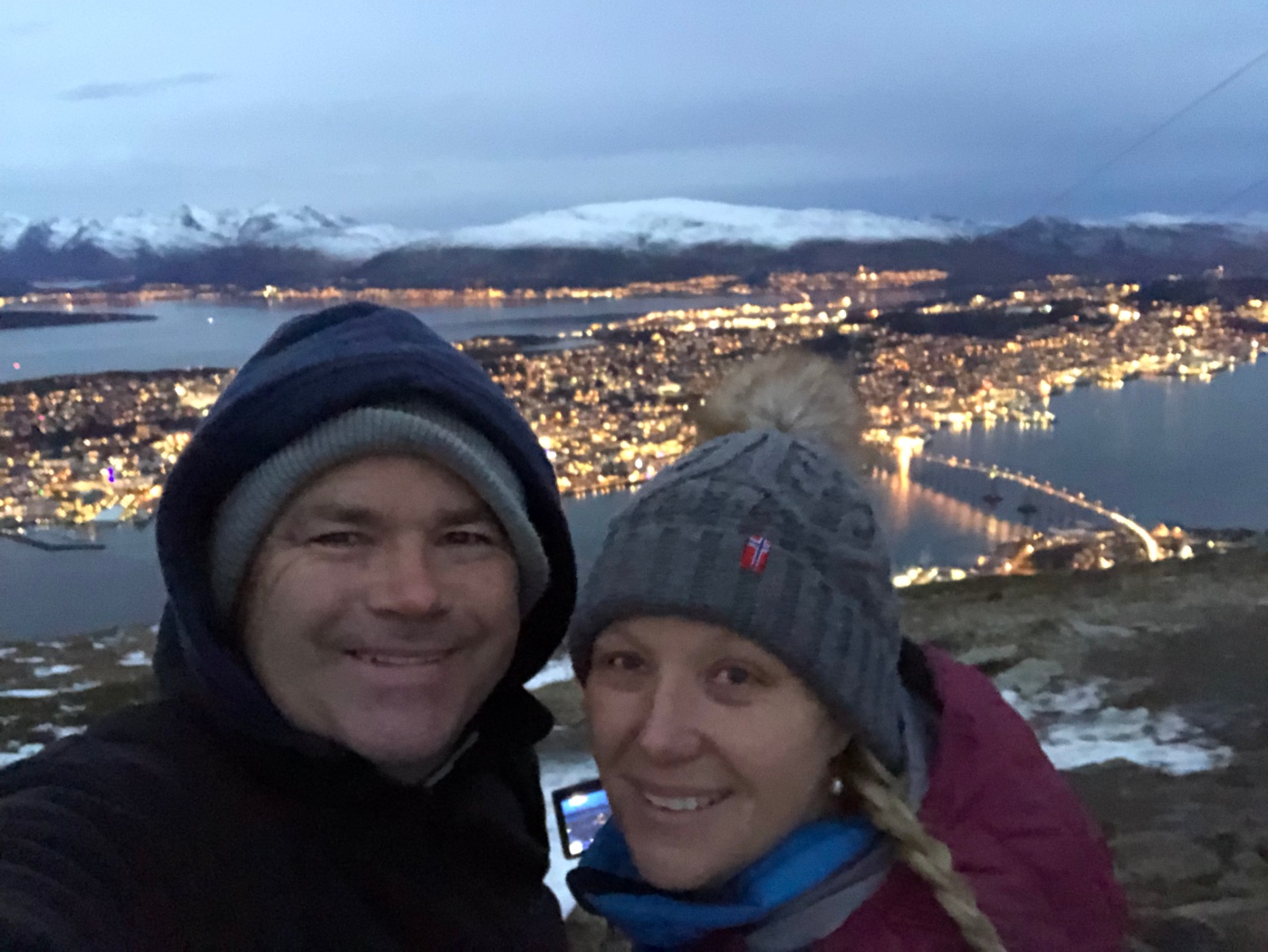 After such a big day yesterday, we were grateful for a slow start and sleep in today. We weren’t due into our first major port until after 2pm. We were able to eat breakfast, relax then eat lunch. The food onboard has been incredible. We are trying so many different dishes, but really as most cruises, it’s too much. We’ll be straight back onto our better habits when we get back!

Tromso is the Gateway to the Arctic. Norweigan Polar expeditions have always left from here and still do.

We disembarked onto Troms Island a ‘Manhattan-like’ island that forms part of the city. Tromso is a planned city. When Tromso was first established back in 1794 part of the coastline extended to where some of the city stands today. Over the last 200 years, the land has been built up and reclaimed. The Island is 10km long and home to 45,000 of the 70,000 population of the city of Tromso. Our guide is a local who has lived here all his life and did not hide his opinion about the population explosion and overcrowding on the island. There is a bridge and 2 tunnels connecting it to the mainland and still there are traffic jams and too many cars. The air quality here is apparently terrible and arguably the worst in Norway.

Historically it was a working port and a place where ships would pull in and recruit their crews to go whaling, seal hunting, fishing or exploring. We passed a statue dedicated to ‘The Unknown Whaler’ which commemorates the many sailors who have lost their lives at sea in these professions.

Furrier merchants were the richest. The fur trade was extremely lucrative, although this is not the case today. Fishing is still a large industry, although the town has turned it’s attention to polar research and the university activity.

The ‘Old Town’ area of Tromso is the only in Norway to be completely original. Undamaged by war and fires that had destroyed other towns, the buildings here are the original buildings from the over 220 year old settlement.

The first stop on our tour was the cable car taking us to the top of Mt Floya. Floya translates to wing – as in the wing of a building. The city is flanked by a central mountain and two ‘wings’. The views were incredible and that is where the pictures were taken from. These require the tripod and new lens as it was 3:30 and already the sun had set. 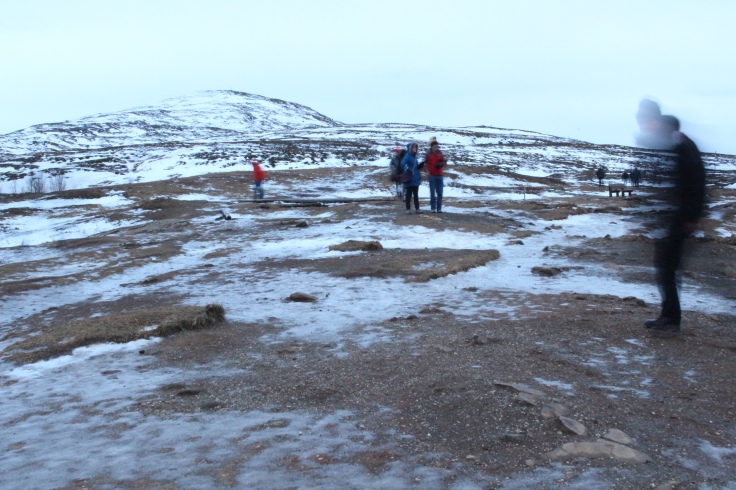 The top of the mountain was precariously icy. We risked life and limb to wander out onto the very slippery landscape to capture these shots – It was fun! The height is 477m above the river.

This part had been know to be a ‘tourist’ area for centuries before the modern day tourist even knew it existed. The locals would come up into the mountain to visit the Sami people. They are the nomadic indigenous people of Scandinavia. We will learn more about them in Finland. The Sami would bring news of the rest of Scandinavia so the local Tromso town folk would come up and spend some time with them and learn the news.

Our second stop was the ‘Arctic Cathedral’. It was completed in 1965, so is a modern addition to the landscape. It features a large stained glass window that depicts Christ flanked by Adam and Eve. It was designed this way to remind the view that all of mankind have a place with God. The Artwork is well admired, although the Architect was quite offended by the installation as it ruined his design that was intended to emanate light out of the building to light up the darkness during the long winters. 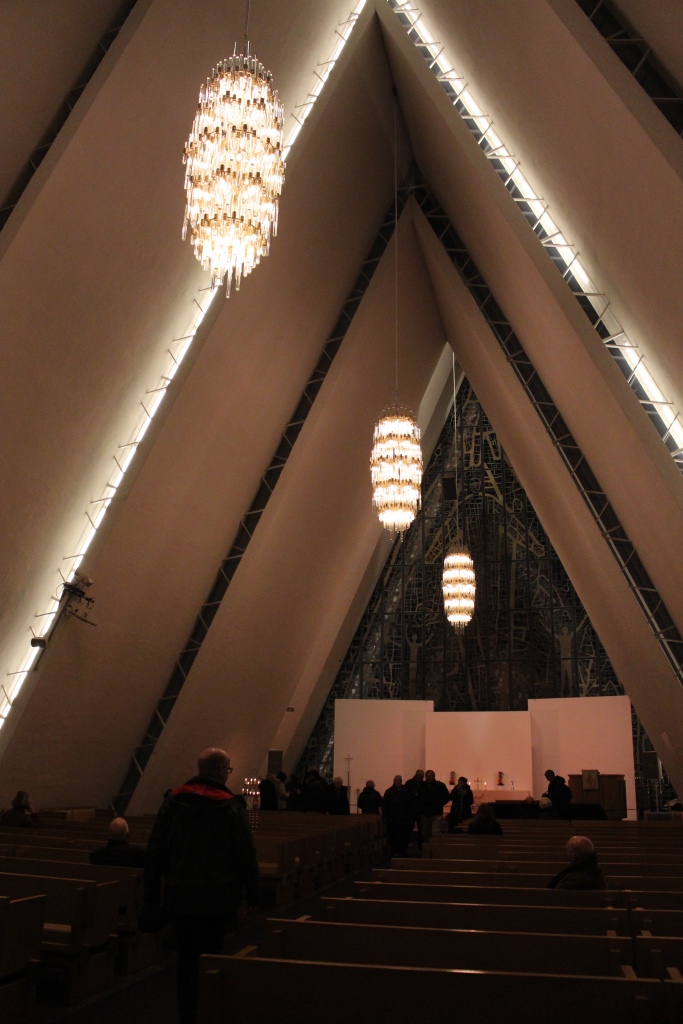 Apart from not actually being a cathedral it was an interesting building from an architectural point of view. In reality it is an Evangelical Lutheran church building however many denominations utilise it. There are on average 1.5concerts held there every day of the year. It was designed with amazing acoustics so is used for non religious concerts as well. Originally it was also to function as a bomb shelter during the Cold War.

Our tour concluded at the Polaris Centre where we saw a couple of videos and learnt a bit more about the shrinking ice caps and threat to the various species who need the ice to thrive. The eco system is falling in on itself and the current prediction by the scientists here is that in 30-40 years the seal population that feeds the polar bears will have declined too far and the polar bears will no longer survive in this region. As it is, the bears have stopped hibernating because they are not getting enough reserves to trigger the hibernation instinct. This means they are feeding all year round and the species they feed on do not have time to reproduce in sufficient numbers. It is a vicious circle that is going the wrong way.

The Polaris centre is also home to a few seals being studied with regard for the purposes of conservation. There was the bearded seal, now threatened, and the harp seal also. We were there for feeding time. We also got to see up close some of the local fish species that frankly we have enjoyed very much along our voyage!

Returning to the ship, our guide pointed out, for the 3rd time, a statue of Roald Amundsen is a famous Norweigan explorer who was the first to reach the South Pole back in 1911, and a few other achievements are arguably his too. His statue stands proudly in the city. Although there is contention for some of the other firsts, the Norwegians don’t categorically claim first place – ie, first to North Pole, first to cross a number of the passages through the Arctic – He is very much considered a major player in both Arctic and Antarctic exploration.