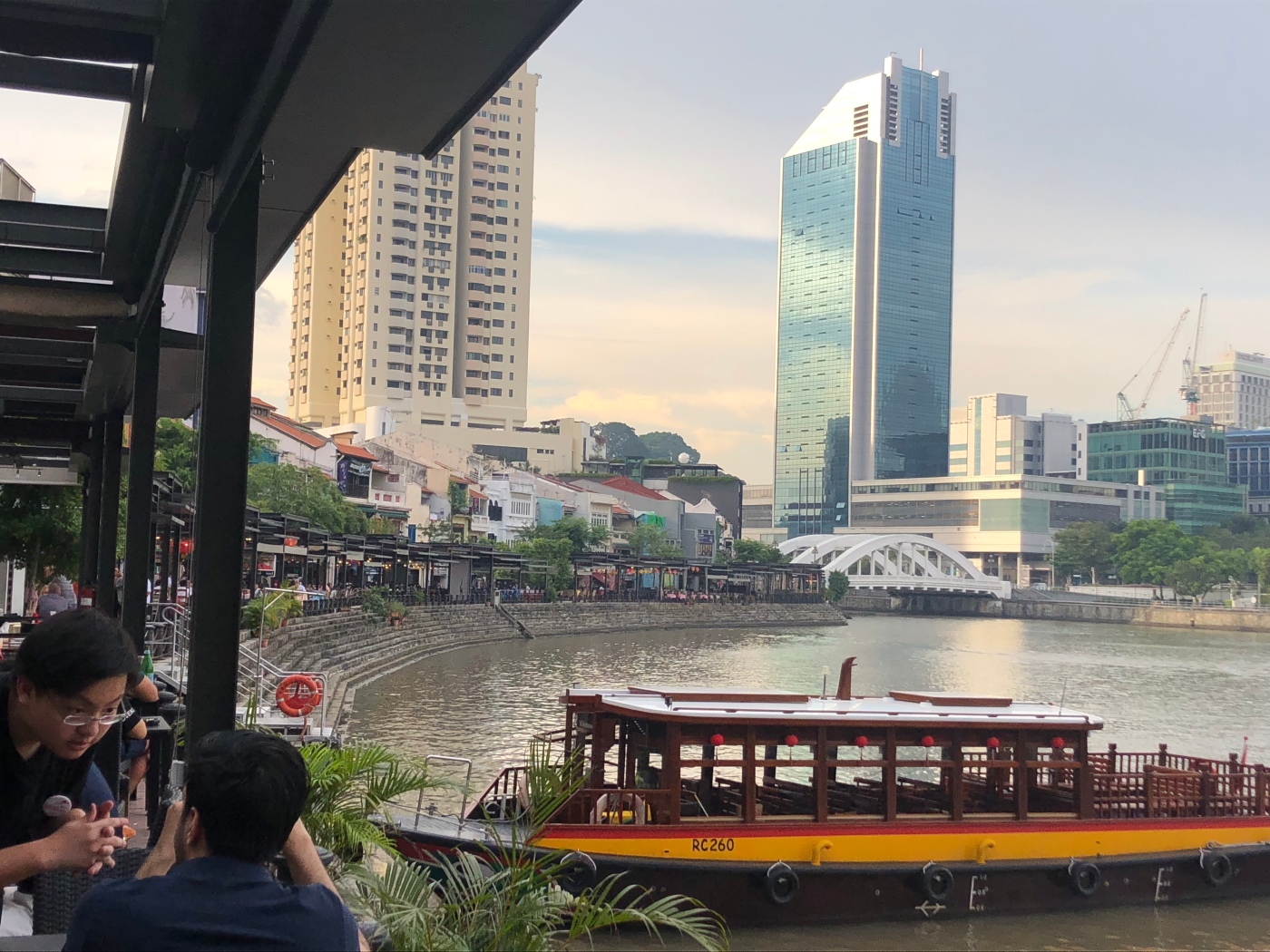 Andy met me after work and we made our way on the train to Chinatown to have a look around.

We have been really lucky with the weather. Whilst it’s of course humid and hot, we’ve avoided rain and when out and about had clear skies.

Chinatown is a precinct that still features the rich Chinese history and culture that belongs to the largest ethnic group in Singapore. There are a number of different types of buildings here that make it lively, interesting and a must to visit. There are temples, old colonial style two story buildings called ‘go-downs’ with covered porches that link them together, the market streets and stalls, and a large hawker centre food market. Up until 1930 the area was known for it’s brothels and red light activity. This was addressed in the early 30’s with the closing of the brothels and new protection was brought in for women and girls. 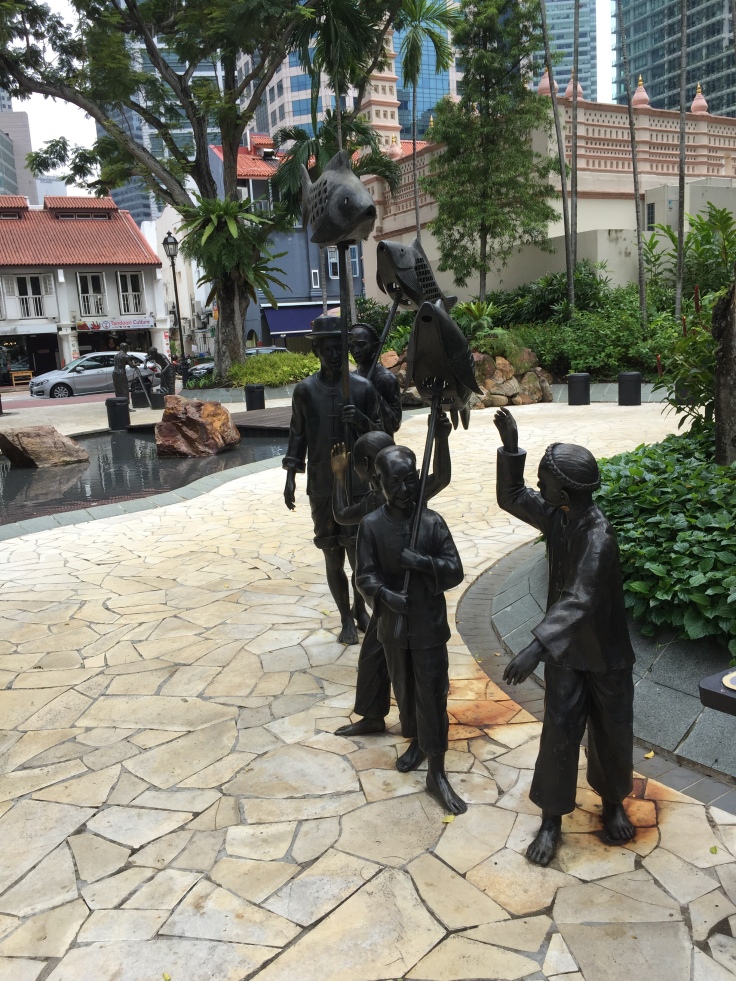 The area was also home to ‘death houses’. The death houses were a place where the dying could go and see out their last days. Many were immigrants from China who were without family. Within the Chinese culture, it was bad luck for someone to die in their own home so the death houses were established to fill a gap and provide for the many rituals associated with dying. There were funeral parlours in the area to ensure a proper funeral also took place and with that became many other business needs.

We visited 3 temples. The Buddha Tooth Relic Temple, Sri Mariamman Temple, Thian Hock Keng Temple. Each temple had is requirements for visitors, ranging from taking off shoes, not taking off shoes, covering shoulders, not taking photos, paying to take photos…We navigated this by carefully reading the signs out the front of each one. We spent most of the time at the Thian Hock Keng Temple. There was quite a bit of English explaining the various carvings.

It was built in 1839 and is one of the oldest Hokkien temples in Singapore. It was built to honour the Goddess of the Seas. The whole structure which includes intricate carving, stone sculptures and tile mosaics was all put together without using any nails. Originally a ‘min temple’ it is now frequented by followers of Taoism, Buddhism, Confusianism and other ancestral worship. 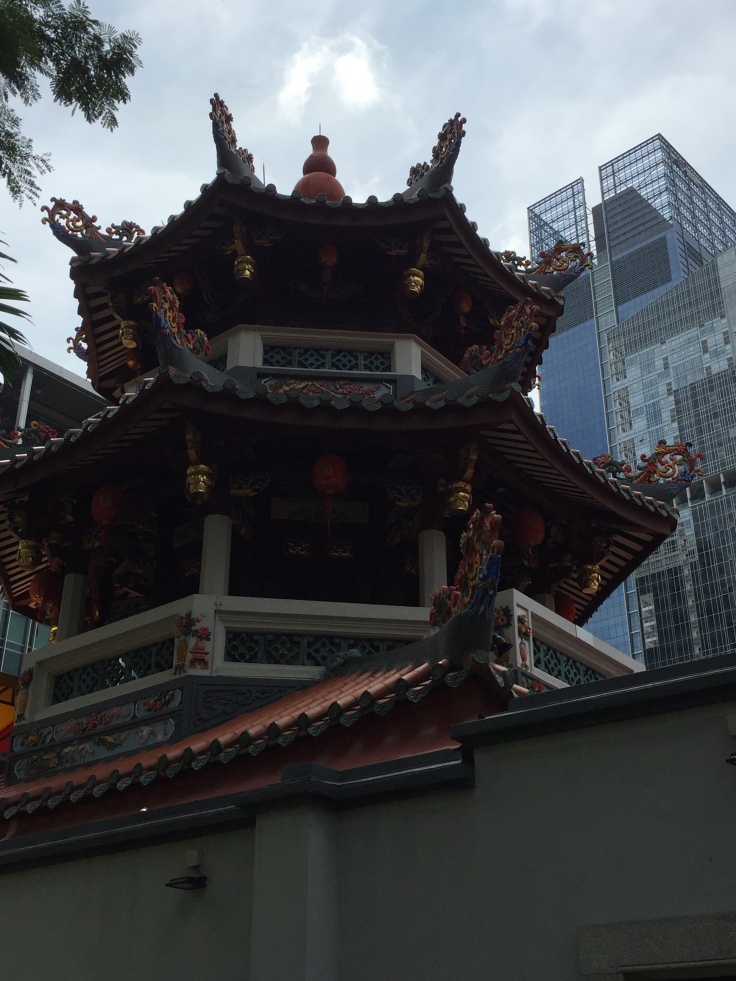 We wandered through the markets and streets and then headed down to Boat Quay to enjoy the sunset. We ate dinner and enjoyed Friday night ‘happy hour’. The sun set was colourful, and as the sun disappeared the coloured lights of the city came up. It was really pretty.

Finally we made our way to One Raffles Place. On the 63rd floor is the highest Alfresco Bar in the World…apparently. For an entry fee of $35, you can enjoy the view, live music, atmosphere and the price includes 2 drinks. We enjoyed a ‘Singapore Sling’ whilst watching the light display down on Marina Bay.

It was such a clear night, we could also see out across the Port of Singapore and to the lights of Indonesia on one side and Malaysia on the other side of the building. What further amazed us is that there was a glass balustrade about 1.5m high with nothing further above that. We enjoyed the company of another couple as we sat and enjoyed the scene.

Eventually we called it a night and walked home back through Boat Quay and across the river to the City Hall area where our hotel is. The night being clear and weather warm, it was so nice to be out walking and enjoying this lively city!